What is the difference between DOS and Windows: 101% Cleared

Whenever you go across the internet and search for a laptop or desktop on Amazon between 25k and 40k, or when you want to get information about a laptop or desktop in the middle price range by going to an offline market.
There are two options mentioned, of which one is the Windows Operating System and the other is DOS (Disk Operating System). Then there is only one thought that comes to your mind is what is the difference between DOS and Windows? And which operating system should you buy?.
You will maybe know a little bit about the Windows operating system and you will maybe have ever used this OS. But many people like you will not know much about the DOS OS.

And we will also talk about a very important question, that many peoples ask is can we install Windows operating systems on DOS laptops or desktop. So be with us till the end to know the answers to all these questions.

What is the difference between DOS and Windows? 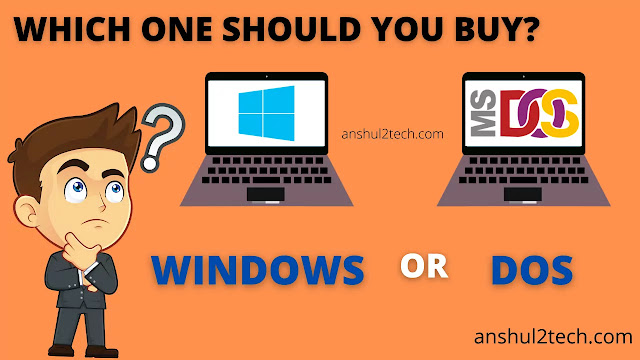 On the computers market (Offline/Online), you get to see two operating systems for laptops and desktops in the middle price range, from these Operating Systems one is Windows, and the second one is DOS.
Windows operating system and the DOS operating system both are owned by Microsoft company, below you can read about what is the difference between DOS and Windows OS?

The Windows operating system was created by Bill Gates in 1985, which is getting better day by day. The WINDOWS OS is developed on the GRAPHICAL USER interface. Running Windows is very easy. In Windows, you see a cursor like an arrow.
You can control this cursor through the mouse. Windows OS can do multitasking, its (GUI) graphical user interface is very good, which looks great. In Windows, you also get security and privacy properly.
In Windows, you can increase RAM up to 2 TERABYTES (only on computers based on x64 architecture) while dos can support only 2 GB of memory.
Read Also: How to save data on Instagram, WhatsApp, Facebook
In Windows, you can listen to music, watch movies, play video games, access the Internet, and many more TASKS you can do with this operating system. 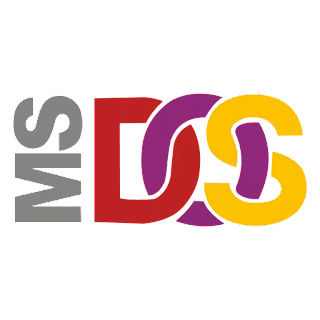 DOS OS is an old, computer OS that was created by Bill Gates on August 12, 1981. DOS OS is a text-based OS that we operate with commands (codes), it does not have the same GUI (GRAPHICAL USER interface) as Windows, so it is very difficult to run DOS OS.

In a DOS operating system, you cannot complete more than one task simultaneously. DOS OS consumes less memory This OS can also work on a weak CPU. This is very old and it is very difficult to use.

DOS is a very poor OS for this time. In this neither we get to see any type of network system. Nor can any ordinary person run it. You must have an understanding of CODING to keep it running.

This is given by installing it in today’s modern computers or laptops because it is a free OS.

DOS vs windows and What is the difference between DOS and Windows?

Can I install windows on the DOS laptop? 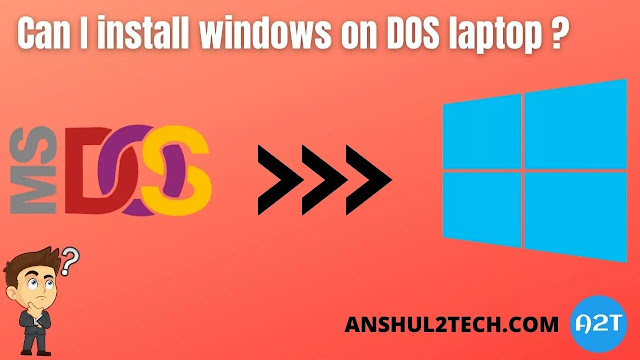 You can install Windows OS on any DOS laptop or desktop computer If you are a techy person and have some knowledge of tech because if you do not know much about it and if you did any steps wrong when installing windows on DOS then you can in trouble and your computer can be dead or defected.
If you have mistakenly purchased a laptop with a DOS OS or you have intentionally purchased a DOS OS and if you want to install the Windows operating system in it, you will need a few things which You can read from “How to Install Windows 10 from USB” article and through this guide, you can easily install Windows in DOS OS.

To install Windows, you must first buy it from Microsoft’s website or online/Offline, for which you will have to pay some bucks.

Which is better after knowing all differences between DOS and windows?

And with this operating system, you can save some bucks too in comparison to Windows, and if want to install windows OS on DOS then you can easily buy Windows Operating System online or offline and can install it on a DOS Laptop or Desktop.

DOS OS will be best for those who have knowledge of tech and they can install Windows on any dos laptop or computer and want to save some money when buying a laptop or Desktop.